The garden is tapering off, and I haven’t gotten the fall garden started. We let the geese into the front to mow the yard, and they of course harvested the garden too. In particular, they cleaned out what was left of the carrots. The tomatoes and now the peppers seem to be giving up on their own, with a little help from the geese.

We got fine crops of the small tomatoes, but the full sized ones didn’t do so well. The Cherokee Purple is delicious. All of the tomatoes split, even when I was watering daily. I suspect that some of the plants had their sprinkler water blocked by the okra and sweet potatoes, but that doesn’t apply to all. Next year the nightshades go where the alliums were this year. They’ll have at least a little more room because I won’t put anything else in the same bed. This year there were herbs and some other stuff early.

The shallots and onions are harvested. and I started freezing leeks today because they are starting to look ratty. I’ll be doing a lot of cooking with leeks this year, they thrived. The alliums will replace the sweet potatoes and okra next year. I’ll put in garlic and potato onions and perhaps shallots once those crops are gone. 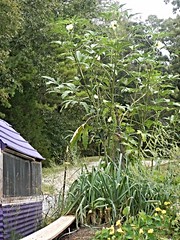 The okra finally came in. There’s a bunch pickled and some frozen, and it’s still coming. We like pickled okra. The sweet potatoes are a complete and utter jungle. I’ll just let both keep going until frost. 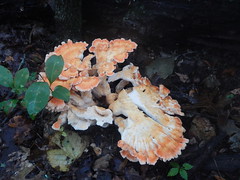 I have to mention the mushrooms as well. We’ve had a fantastic season, and of course we hope it’s not over. There are chanterelles pickled and frozen, dried boletes, wood ears and oysters, and a number of frozen chickens. We’ve found a number of new places to go. This has been our best season ever.