The dam is Mack Hill Gaela, and the sire is Pikatti’s Galdur.

There are six of them, born June 16. They have a whole photoset on Flickr.

And here they are: 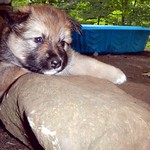 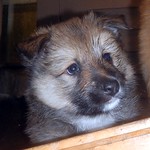 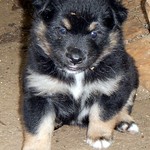 This is the other girl. We think she’s going to be gorgeous like her aunt Tyra. She is rather fond of her own voice. Lisa calls her Noisy Nellie. 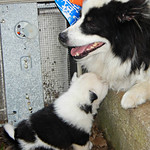 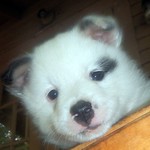 Whiteface, AKA Panda, with his grandmother Disa. His face is noticeably more pointed than the others at this age. I would bet that he’ll end up with the standard spitz muzzle like everyone else. We tried translating “Panda” to Icelandic, as we did with “Tank” for Bryndreki, but discovered that the Icelandic for “panda” is “panda”. 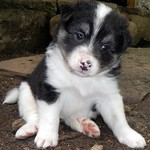 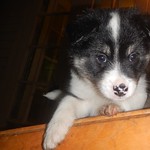 Zak, who we expect to look just like his grandmother. 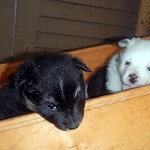 Little Stripe with Panda at about 4 weeks. 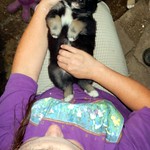 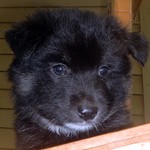 And finally our cuddle bucket, the only one with a pure black face.

We expect to have litters from both Gaela and Stina in the early part of 2016, but none until then. We’ve yet to choose a stud for either. Our current thought is a brown/sable that carries black.